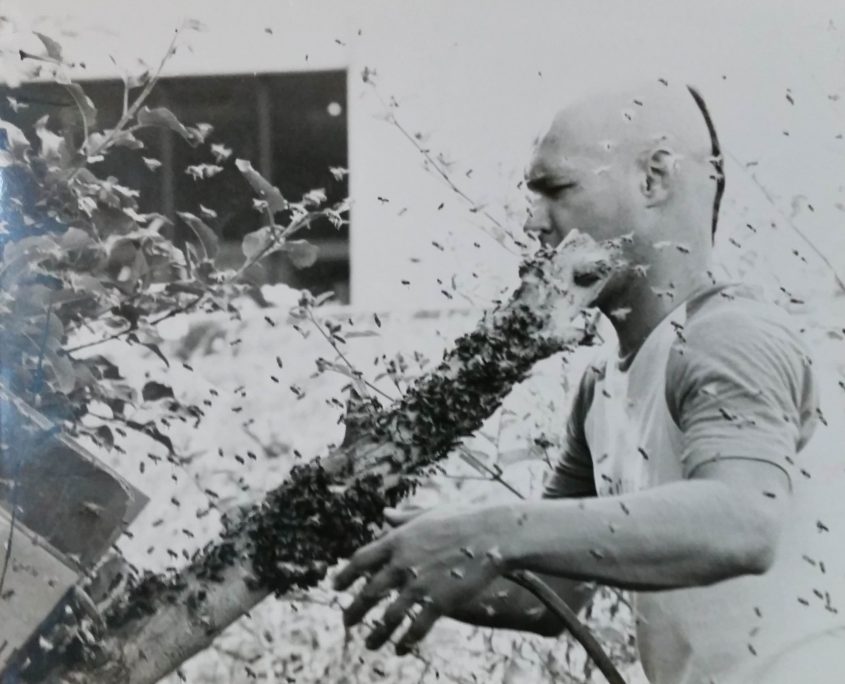 Who We Are & Our History

OUR GOAL: TO PRODUCE A SELF SUSTAINING HONEYBEE STOCK THAT IS DISEASE AND MITE RESISTANT WITHOUT THE USE OF CHEMICALS.

OUR HISTORY: We are Queen Breeders located in the uniquely isolated micro-climate of the North Olympic Peninsula of Washington State. In 1997, Frustrated with the universal practice of spending large amounts of money on chemicals that poorly controlled the pests and pathogens in honeybees colonies, and increasingly concerned about the residue of those chemicals in our honey and hive products we began “searching for a better way….”

At that time, research literature indicated there were few if any surviving feral honeybees left in the United States due to the devastating effect of varroa mites on their population. Determined to find out if that was true, we set bait hives in very remote locations, successfully capturing several wild swarms. Since reliable oral history of the area confirmed that these isolated bees had managed to survive for over 40 years without human intervention, we surmised they may have developed some natural resistance.

Successful in our initial fight against varroa destructor, our breeding program soon faced a new type of destruction that converged in the form of a perfect storm severely impacting all Pacific Northwest beekeepers.

Cool damp weather throughout the summer of 2007 caused severe pollen shortages, sending nutritionally depleted colonies into that winter with low fat reserves. The following spring remained persistently cold and wet well into mid- June, creating a shortened season for colonies to recover before they faced the final blow of an unseasonably long cold winter. This combination of environmental stressors left our untreated colonies particularly vulnerable when nosema ceranae arrived as the newest pathogen in the yard.

When alarming reports of state-wide losses from this new nosema began buzzing in all the media in the spring of 2008, we were already experiencing our first devastating loss. Realizing these initial fatalities could signal the end of our dream to discover a better way…we remained determined to ride out the course of these events to its natural conclusion. We knew it was a gamble, but we had always been aware that living in the Pacific Northwest presents its own set of challenges for beekeepers. Located in the largest temperate rainforest in the world where rainfall can exceed 200 inches per year, our adaptive wild survivor stock had already managed to thrive on its own …it was worth the risk!

Because we are located in this cool damp environment, where our apiary battles prolific growth of mold, mildew and fungi of all kinds, we had already been utilizing independent lab results for more than a decade to select for tolerance to nosema apis. Our previous success against this older fungus gave us the courage to pursue the possibility of selecting for tolerance to this new nosema as well. We chose to see this challenge as an opportunity uniquely matched to our isolated microclimate.

We used an emergency application of fumagillin in 2008 to stabilize our colonies from complete collapse. In 2009 we began selecting for tolerance to the new nosema in earnest by monitoring our un-medicated breeder colonies while sparingly using fumagillin on only enough production colonies to insure adequate support populations during that critical recovery season. By 2010, it was no longer necessary to use fumagillin at all.

At the same time, we also instigated additional management techniques:

Began in-house microscopic laboratory testing to quickly identify disease
Improved nutrition with additional pollen supplements
Implemented a rigorous routine to sterilize spores on our equipment, including the use of 10% bleach solution on surfaces, and propane torch on woodenware
Systematic comb replacement
Incorporated Instrumental Insemination
Addition of herbal food supplements
Continued to withhold all treatments from our breeder colonies

Research presented in 2010 by Jerry Bromenshenk, of the Biological Sciences Department of the University Of Montana consistently identifies the presence of Nosema ceranae as a significant factor in Colony Collapse Disorder (CCD) which has been widely reported all over the world. His conclusions state in part:

These findings implicate co-infection by invertebrate iridescent virus, Iridoviridae (IIV) and Nosema with honey bee colony decline, giving credence to older research pointing to IIV, interacting with Nosema and mites, as probable cause of bee losses in the USA, Europe, and Asia.http://www.plosone.org/article/info:doi/10.1371/journal.pone.0013181

While this is a working theory and they are still in the discovery phase looking for new pathogens, Evans and his colleagues are also actively looking for a way to boost bee defenses against Nosema. A way to protect against Nosema might be the key for now  http://www.ustream.tv/recorded/7203825

And finally, in March of 2012, we were delighted to read a newly published report out of Denmark, which concluded:

…After decades of selective breeding for Nosema tolerance in the Danish strain, it appears these bees are tolerant to N. ceranae infections.

Withholding chemicals to pursue natural selection in conditions of extreme exposure to this new fungus, with all of its associated viruses, was a high risk choice for us to make.

Yet, motivated by these findings we continue to believe in the possibility…

Heartened by the Danish report, after four consecutive years of 90% losses, we were encouraged when spring arrived in 2012, and only 10% of our colonies had failed, and remains stable year after year.

Our unmedicated colonies continue to maintain healthy populations in spite of staggering n. ceranae spore loads. By carefully selecting our breeder queens from this core group of survivors, we are confident that the regionally unique lines we are offering can contribute genetics capable of withstanding many of the lethal pathogens that threaten honeybees everywhere.